The American Heart Association is honoring five local volunteers and organizations for their work to help create a world of longer, healthier lives.

The Eastern States Volunteer Awards recognize companies and volunteers across the 13 states of the Eastern Region of the American Heart Association in several categories. Winners from the Central New York area were recognized in almost every category.

“The work we do wouldn’t be possible without the efforts of our incredible volunteers,” said Franklin Fry, executive director of the Greater Syracuse American Heart Association. “We are proud to recognize so many people and organizations from our area with this high honor.” 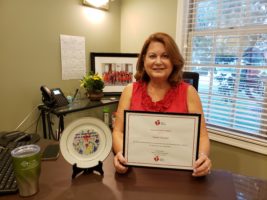 Susan Crossett, Legacy Leadership Award – The Legacy Leadership Award recognizes volunteers for exceptional service and contributions over a significant portion of time. Susan Crossett joined the Syracuse Go Red for Women Executive Leadership Team in 2011, and has served each of the ten years since, including serving as campaign chairwoman in 2012. She also served on the Executive Leadership Team for the Syracuse Heart Walk in 2013 and 2020. She has played a key role in securing six campaign chairpersons for Syracuse campaigns, leading to more than $1.5 million in fundraising! David Holst, Young Hearts Award – The Young Hearts Award honors youth volunteers for outstanding contributions to heart health and mission. David Holst is a homeschooled fourth grader from Parish who has raised nearly $20,000 since kindergarten for the Jump Rope for Heart and Kids Heart Challenge programs. As a heart disease survivor himself, David says he loves to raise money for the American Heart Association because it makes him feel good. Kinney Drugs/Kinney Drugs Foundation, Corporate Leadership Award – The Corporate Leadership Award recognizes corporations and companies that demonstrate exemplary support of, and involvement with, the mission of the American Heart Association over at least five years. Kinney Drugs was recognized, in part, for its many decades of support and leadership engagement, including promotion of National Wear Red Day. Kinney Drugs is regularly a national top fundraising company for National Wear Red Day. Stores also display health information throughout all of February for American Heart Month, and company representatives serve as leadership volunteers for the Syracuse Go Red for Women campaign. Kinney Drugs Foundation regularly supports the Syracuse and North Country Heart Walks, as well. St. Joseph’s Health and the Syracuse City School District were honored for their work on the American Heart Association’s Growing Healthy Hearts program. The collaborative program brings together the hospital, the district, the AHA and other community organizations to provide elementary schools with curriculum, resources, and incentives to teach and inspire students to make healthier choices. The program originally launched in five schools and expanded to seven. The SCSD has used the program to better meet the New York State mandate that students receive 120 minutes of physical education per week.  Prior to the program, none of the 19 elementary schools were meeting the mandate.  By the year ending 2020, 16 schools were meeting 80 minutes/week and were on their way to increasing that metric before COVID-19.